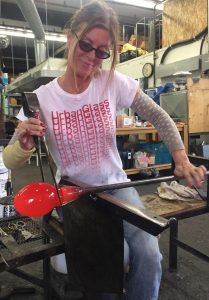 Laura Murdoch is a glass artist from the Pacific Northwest who began at Pilchuck Glass School in 1997. She spent ten years assisting William Morris at Pilchuck before becoming Shelly Muzylowski-Allen’s primary assistant for many years. She has also worked closely with Karen Willenbrink-Johnsen and Randy Walker.

Murdoch uses large ancient simple forms as blank canvases on which to “paint” her patterns on the glass, through sand-carving and other processes, building them one layer at a time through the “graal” process. She then reconstructs these patterned pieces into an exuberant, cohesive whole far greater than the sum of its parts. The pieces are highly labor-intensive, and may take as many as 100 hours to complete. She states that the seeds of her most recent work, the Embellish Series, were sewn over a long period of time, simmered underground in her psyche, and were finally executed only recently.

Laura has taught and assisted other glass artists at various schools in the Pacific Northwest. Her work has been featured in a number of publications and is part of many private collections.

Holsten Galleries is honored to be one of the first major American glass galleries to feature the work of Laura Murdoch. 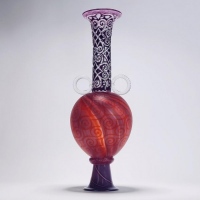 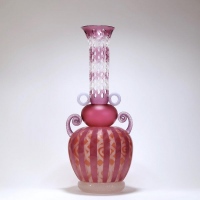 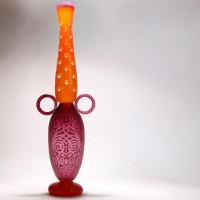 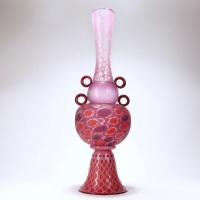