Lino Tagliapietra was born in Murano, a small island in the Venetian lagoon, in 1934. At the age of 11 Lino Tagliapietra began his apprenticeship with the great maestro Archimede Seguso and by the age of 21 he had mastered the age-old glass blowing techniques and worked his way up to the title of maestro.

Over the next 25 years Lino Tagliapietra worked in association with several other master glass blowers at various factories on Murano. By the late 1960’s and 1970’s he was developing his own designs and creating them under the auspices of the factories in which he worked. In 1977 Lino Tagliapietra became head glassblower for a new glass company, Effetre International.

Lino Tagliapietra Comes to the U.S.!

In 1979, at the invitation of Dale Chihuly, Lino Tagliapietra came to teach a summer workshop at the recently created Pilchuck School, north of Seattle. Thus began a long history of sharing his centuries old Muranese glassblowing technique with a generation of eager young American glass artists. Lino Tagliapietra, in turn, was excited by the youthful enthusiasm and experimental mind set of the glass artists from the U.S. Influenced by the Abstract Expressionist school of painting these American artists were long on creative innovation but short on technique. Lino Tagliapietra, on the other hand, was a master technician coming out of a rigidly traditional approach to glass art and he loved the passionate exploration of new ideas and forms of the young American glass artists.

Anecdotally, Lino Tagliapietra’s first trip to the U.S. involved several flights and some missed connections and took most of two days. He arrived in Seattle speaking no English and was whisked off to Pilchuck where, upon his arrival, he was informed that his students were waiting for him at the hot shop for his first scheduled class. Thus, Lino Tagliapietra began teaching his first class, jetlagged and sleep deprived, and as excited as he had ever been about anything in his life. His students loved him!

In 1987 Holsten Galleries became the first gallery in the U.S. to show the work of Lino Tagliapietra. Since that time we have worked closely with Lino Tagliapietra to provide his very best pieces to hundreds of glass collectors. Today Holsten offers an extensive selection of some of the finest of the Maestro’s works. All of the Lino Tagliapietra glass for sale seen on this website are available through Holsten Galleries. Please feel free to contact us for price information or for more images of these pieces, including close up shots.

Today Lino Tagliapietra is widely recognized as the world’s greatest living glass blower. Even Dale Chihuly has given him that accolade. Indeed, many consider him to be one of the greatest glass artists of all time, and possibly the greatest. Lino Tagliapietra blown glass works are in the collections of many major glass museums throughout the world and are sought after avidly by collectors of glass art. Some of the public collections which include Lino Tagliapietra blown glass art are the Carnegie Museum of Art in Pittsburgh, the Columbus Museum of Art in Columbus, the Corning Museum in New York, the Hokkaido Museum of Modern Art, in Japan; The Museum of Glass in Tacoma, Washington; the Metropolitan Museum of Art in New York, the Palm Springs Art Museum in California, The Renwick Gallery in Washington, D.C.; the Tokyo National Modern Art Museum and the Victoria and Albert Museum in London.

Lino Tagliapietra’s glass sculpture is known for its graceful forms, its exquisite palette of colors, and its masterful techniques. These traditional Venetian techniques include:

*Numerous styles of engraving or surface cutting.
*Cane work (the use of thin threads of glass) which are incorporated into the hot glass.
*Murini (glass tiles that are spread out in intricate colorful designs on a metal table and rolled onto the bubble of hot glass). 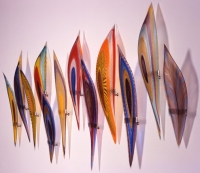