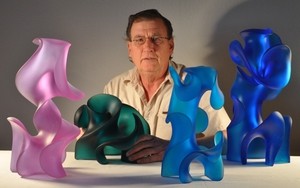 Harry Pollitt began his art career sculpting in wood. For over 40 years he has shown his work in leading galleries throughout the U.S. and abroad. A few years ago he became keenly interested in the medium of glass and began to wonder how his sculptural style would translate into colored glass. The result has been a strikingly beautiful series of kiln cast crystal sculptures. Unlike anything that has been achieved in glass casting in the past, Pollitt has developed a technology which allows him to achieve the same flowing, sensuous curves and negative space that make his wood sculptures so compelling. Translating that aesthetic into glass, Pollitt has added a sense of lightness and grace which is normally somewhat missing in the works of other glass artists working in cast glass. Each sculpture begins with a solid block of wax, from which Pollitt slowly and meticulously cuts away the majority of the wax, thus liberating the form that is waiting within (to paraphrase Michelangelo). True to his background in working with wood, Pollitt hand sands each cast piece to obtain a surface texture that is more velvety and soft than the typical satin finishes produced by acid etching and sandblasting. 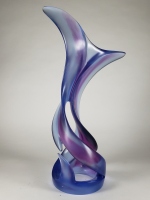 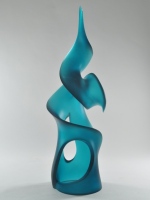 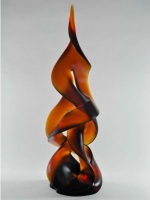