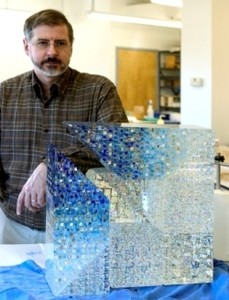 Jon Kuhn is one of the foremost glass artists in his field, creating highly intricate architectural glass art sculpture that has won world-wide acclaim. Kuhn is a cold glass artist, working exclusively in cold glass (no heat is involved in the making of his glass cubes and other forms) cutting the glass into small segments before polishing and laminating them into abstruse knots of light and color. Jon Kuhn glass sculptures are immediately recognizable for their intricacy and ability to reflect and refract light.; Among  cold glass artists, Kuhn’s work stands out for its complexity, its geometric forms and for its presence which has almost a spiritual quality. Jon Kuhn believes that “the goal of spirituality is perfection” and that striving for perfection is quite evident in his architectural glass art. Jon Kuhn, who has studied Eastern spirituality extensively, writes, “Striving for perfection has never been more evident in what I do. Perhaps my glass sculpture has become an architectural model of a vision for a better world.”

Kuhn originally studied ceramics in college before becoming one of the leading cold glass artists. His early works in cast glass had ceramic like surfaces and were reminiscent of rocks which when broken open reveal glass like minerals inside. Currently, Kuhn creates cold glass art in a variety of shapes and forms but he is perhaps best known for his glass cubes which contain  a colorful glass interior cased in clear glass. Jon Kuhn received his MFA from Virginia Commonwealth University. Kuhn’s architectural glass art is very highly regarded among collectors and connoisseurs of cold glass art. Jon Kuhn glass sculptures can be found in many prominent private and public collections, including the White House Collection, the Metropolitan Museum of Art in New York, the Smithsonian American Art Museum, the Carnegie Museum of Art and the Corning Museum of Glass. He resides in Winston-Salem, North Carolina. 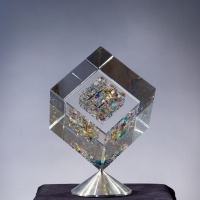 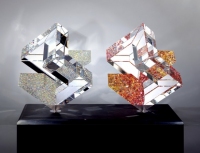 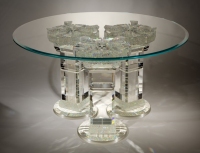 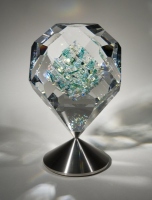 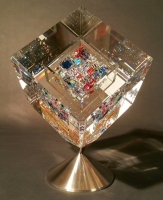 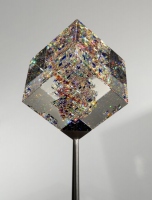