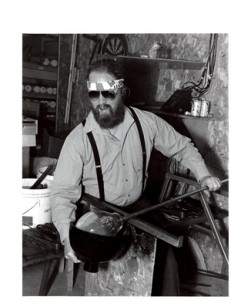 I was born in Ladysmith, WI in 1955.  My parents enjoyed finding and collecting old bottles and antique glass.  I grew up sharing these pursuits with them and a love for both bottles and old glass is still with me.  Around the farm, we always had lots of animals, in particular mink and otter.  My parents were skilled animal handlers.  As a child, I starred in a Walt Disney production called “An Otter in the Family.” It was this experience that gave me a thirst for fame and fortune far beyond my humble rural roots.

While attending the University of Wisconsin, Madison on a four-year National Merit Scholarship, I discovered the glass studio in the art department.  I soon switched from geology to an art major and received a BS in art in 1978.  Upon graduation, I spent a miserable year working at a small glass factory in New York City.  Then I was offered a job as studio assistant to my former professor Harvey Littleton in 1979.  After the experience in New York, working for the most influential artist in the studio glass movement in a state-of-the-art facility was paradise.  Not only the working situation, but the mild climate, beautiful landscape, strong craft community and virtually no mosquitoes won me over.

In 1982, I met my future wife Mary Lynn White.  We began working together not long after and soon settled in Spruce Pine where I built my own studio in 1984 next door to our house on Altapass Highway.  She brought her dog Tonweya and a love of plants with her, both of which shifted my life in a more home-centered direction.

Harvey Littleton has had a huge influence on my work, first as a professor and later as a boss, mentor and friend.  I’ve also had the opportunity to work for and with many European glass designers and artists.   Whenever I watch an accomplished glass maker, I learn and absorb new techniques and add refinements to old skills.

My work has been heavily influenced by ancient glass, both by a love of vessel forms and by the ancient skills of blowing and fusing.  In contemporary glass, I try to combine the thick crystal forms favored by Scandinavian designers with the intricate cane techniques found in Italian glass.

When not working glass, you may find me gardening, cooking, surf-fishing or hunting for something – rocks, mushrooms, strange pieces of wood, or what kind of bird is out singing in the hemlocks. 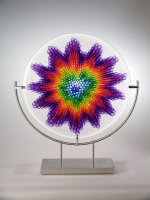