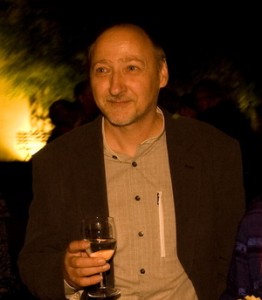 Martin Rosol came to the United States in 1986 to pursue his career as a glass sculptor. That path was unavailable to him in his native Czecholovakia before Vaclav Havel and the “Velvet Revolution” transformed that communist country into what is now known as the Czech Republic.

Martin, like many Czech glassworkers, learned his trade in a “company school” set up to train craftsmen to execute limited edition designs for art glass manufacturers. Though the arrangement provided employment for many, it did not provide young artists with the degree required by the old regime to sell art. So, by day, Martin turned out functional art in the form of bowls and vases for the factory. At night, using scrap from the day’s production, he created his own larger, more abstract pieces. Before long his sculptures were being exhibited in Europe and the United States, and in 1981, Martin was awarded the Bavarian State Prize for Glass Sculpture in Munich.

Eventually, through friends, Martin had the opportunity to come to the U.S. on a visitor’s passport, to work with an established glass artist in New York State. He set up machines for the artist and worked with him in his studio, all the while perfecting his own work. Holsten Galleries in Stockbridge was among the first to sell some of his pieces during this time in the U.S. After five months his visa expired, and he had to return to Czechoslovakia permanently in the summer of 1986.

The Rosol family’s journey took them from Hungary, to Yugoslavia, to Austria then to Germany, where they waited for two years to get visas to emigrate to the U.S. They signed up for English classes together at Greenfield Community College. In 1994, The Rosol family became naturalized American citizens and they now live in Massachusetts, where Martin works in his own studio.

Influenced most by architectural studies, Martin’s sculptures, in the words on one admirer, are “works of elegant design and craftsmanship”. Made with several pieces of glass precisely cut from blocks of crystal, the glass is constructed in architectural forms after selected surfaces have been sand-blasted.

The sculptures are multi-dimensional, some surfaces clear, some opaque. The results are “monuments to light”.

Rosol’s public collections include the American Craft Museum in New York, the Kanazawa Museum in Japan and the Moravian National Gallery in the Czech Republic. 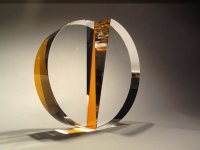 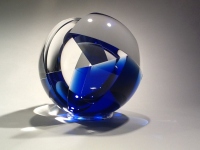