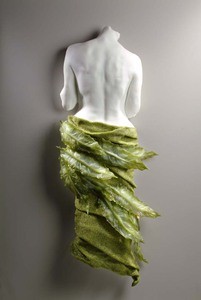 Mary Van Cline has long been well known in the glass art world for her compelling sculptures combining glass and photography. More recently she has also been creating ethereal female figures in cast glass, almost as if the human images in her photographs had somehow escaped from their two dimensional realm and appeared in the three dimensional world. Van Cline earned a degree in design and architecture from North Texas University in 1976 and a Masters in Art in 1977. Two years later she was introduced to glass art at the Penland School of Crafts and went on to study at the Massachusetts College of Art in Boston where she earned her MFA in Glass Sculpture and Design in 1982.

Mary Van Cline’s glass sculptures often combine both cast glass and cold glass techniques with photosensitized glass, leading to an artistic expression that is unique in the glass art world. She has taught at Pilchuck Glass School, Penland School of Crafts, Rhode Island School of Design and several colleges and universities. She has received numerous awards, fellowships and honors, including from the National Endowment for the Arts, the Fujita prize from the National Living Treasure of Japan and others. The glass sculptures of Mary Van Clline are in numerous private and museum collections around the world, including the Corning Museum of Glass, the Detroit Art Institute, The Glasmuseum of Ebeltoft, Denmark, the Hokkaido Museum of Modern Art in Sapporo, Japan, the Hunter Museum of Art, the Philadelphia Museum of Art and the Smithsonian American Art Museum’s Renwick Gallery. In recent years, Mary Van Cline has created a number of large-scale commissions for both public spaces and private collectors. She lives and works in Seattle, Washington. 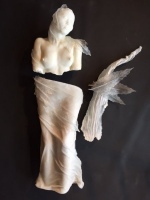