Daniel Clayman, artist of contemporary glass, lives in Rhode Island where he creates his large-scale objects in cast glass. Most of his work is either clear or soft colors in monotone and thus depend much more on their formal aspects than they do on color. Some might say that Daniel is more a sculptor using glass as his primary material than a glass artist in its normal connotation. Another way of saying this is that the sculptures of Daniel Clayman would be successful from a formal point of view no matter whether they were created in bronze, stone, clay or glass. With one major exception: the play of light in Clayman’s glass art enhances the objects dramatically in comparison with how they might appear in a solid, non-translucent medium.

Daniel Clayman’s biography informs us that he was born in Lynn, Massachusetts, in 1957. He holds a degree from the Rhode Island School of Design (RISD) and also attended the University of Massachusetts, Amherst. He is the recipient of several grants and awards and has had numerous one-person shows throughout this country. Clayman has also had one-person exhibitions at the Tacoma Museum of Glass in Tacoma, Washington, the Mint Museum in Charlotte, North Carolina and the Fuller Craft Museum in Brockton, Massachusetts.

Works in glass sculpture by Daniel Clayman may be found in the permanent collections of the Museum of Fine Art in San Francisco, The Museum of Art and Design in New York, the Corning Museum of Glass, the Hunter Museum of American Art in Chattanooga, the Cleveland Museum of Art, the Milwaukee Art Museum, the Museum of Fine Art in Boston and the Renwick Gallery of the National Museum of American Art of the Smithsonian Institution in Washington, D.C. Daniel Clayman is an artist whose work tends to be large in scale and sometimes can be considered architectural glass in that it can fill up a whole wall. One cannot fully appreciate the subtle beauty of the sculpture of glass artist Daniel Clayman until one sees his pieces and glass installations in person. In addition to Clayman’s biography, the following words by the artist himself are very helpful in understanding his approach to glass:

My first training in the arts was in stage lighting design for modern dance, opera, and theater. While I moved away from a professional career pursuit in lighting design, I have never turned away from my observations of light. Using glass as my primary sculptural material, I have spent the last twenty years developing a vocabulary of forms which describe volumes of light.

Over the past four years, my studio work has centered around the creation of large-scale glass castings that thematically reference the “capturing of light.” One of the many mysteries of light is that it refuses to reveal any of its essence until it happens to relect on something other than itself. For instance, the headlight of a car projects (reflects) light onto objects as the viewer approaches, but not until there is a foggy mist in the air does one see the shape and arc of the beam. 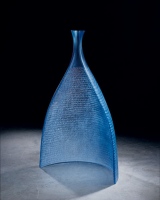