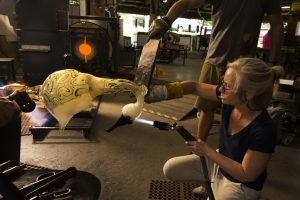 Suspending creatures in moments of tension and recalling the myths and legends with which they are associated, Shelley Muzylowski Allen reminds us that nature is precious and fleeting. From the Red Gazelle to the Polar Bear, some of her subjects face possible extinction or have been forever lost in the tides of time. Using her background in painting and her understanding of anatomy, Muzylowski Allen creates contemplative vignettes with hot glass. Sumptuous coloring and textural surfaces of her forms inspire a powerful influence on human feeling. By rendering creatures in states of grace, movement, or repose, she hopes to capture a moment and their inherent nature, and uncover how their nature affects and is inherent in us. Originally from Canada, Shelley Muzylowski Allen moved to Washington State over 20 years ago. She and her husband, artist Rik Allen, work out of their glass and mixed media studio in Skagit Valley, WA. They hike and camp to spend time with nature as much as possible.

From 1998 to 2004 Shelley Muzylowski Allen was a key team member in the studio of William Morris.