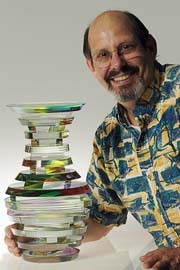 Sidney Hutter received his M.F.A. at Massachusetts College of Art and his B.S. in Art at Illinois State University.

Sidney was among the first artists in the world who experimented with laminated glass techniques and is considered a pioneer in the American Studio Glass Movement.

His works are included in many important public collections including The American Craft Museum, NYC, The Corning Museum, The Metropolitan Museum of Art and The White House.