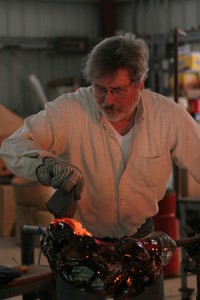 Schwarz is currently recognized for his recent Z-Axis series, in which his intent is to “try to create an illusion of space.” With pieces crafted of clear glass with colored glass overlays, faceted and etched to create illusions of perspective, optics, and contrasts, Schwarz has made his way into the ranks of the top glass blowers in the United States.

Educated at Clark College in Vancouver, WA, and Central Washington University in Ellensburg, WA, Schwarz continued on as a Staff Member at Pilchuck Glass School and received his Masters of Science/Glass from Illinois State University in Normal, IL, where he studied with Joel Phillip Meyers.

Works by Schwarz are in the Corning Museum of Glass, Corning, NY, the White House in Washington, DC, the Museum of Art and Archaeology, University of Missouri-Columbia, and High Museum, Atlanta, GA as well as numerous other private collections and corporations. 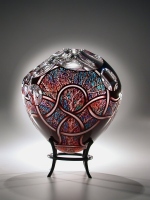 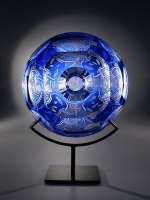