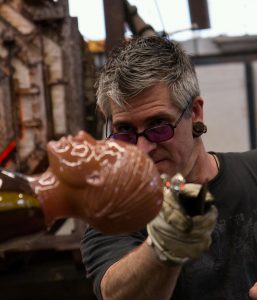 Ross Richmond began working in glass in 1991  at the Cleveland Institute of Art, where he received his B.A. in 1995. He worked  for Dale Chihuly, Preston Singletary and became a key member for William Morris’s team  prior to becoming an independent  full-time glass artist. Richmond focuses mainly on the human figure in his glass sculpture. Many of his figures seem to be captured in a moment of introspection or in a symbolic gesture. Ross frequently teaches at Pilchuck Glass School in Stanwood, Washington and at Penland School of Crafts in Penland, North Carolina. His works can be found in major collections in the U.S. and abroad.