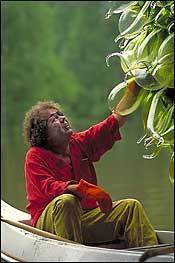 Dale Chihuly was born in Tacoma Washington, in 1941. He graduated in 1965 from the University of Washington where he was first introduced to glass art while studying interior design. He received his M.S. in glass sculpture in 1967 from the University of Wisconsin, where he studied glassblowing with Harvey Littleton. In 1969 he established the Glass Department at the Rhode Island School of Design, where he taught until 1983.

In 1983 Chihuly returned to his native Pacific Northwest where he continued to develop his own work at the Pilchuck Glass School, which he had helped to found in 1971. Throughout the 1970’s , influenced by the great glassblowing tradition of Murano, Dale Chihuly glass sculpture was influenced by the team approach to glassblowing for which Chihuly art glass is now famous. Working with a team of master glassblowers and assistants has enabled him to produce architectural glass art of a scale and quantity unimaginable working alone or with only one assistant.

After an automobile accident in 1976 in which he lost the sight in his left eye, Chihuly relinquished the gaffer (chief glassblower) position and turned over that position to William Morris. Utilizing Morris’ substantial talent and physical strength, Chihuly developed the large scale, multi-colored forms known as the Macchia series (Italian for “spotted.”) Dale Chihuly glass sculpture today is seen in many series, including the Macchia, Seaforms, Persians and Baskets.

In the early 1980’s, Chihuly and Morris worked extensively on the Seaform series, undulating shell-like forms within forms. They also began the Soft Cylinder series, which combined elements of the earlier Basket and Cylinder series. In 1986, Chihuly developed the new Persian series with former R.I.S.D. student Martin Blank as gaffer. In 1988, he began the highly ornate Venetian series with master Italian glassblower Lino Tagliapietra as gaffer. Dale Chihuly glass art for sale at Holsten Galleries includes examples from all of these series.

In the 1990’s, while continuing to work intermittently on his previous series, Chihuly turned his attention towards large-scale architectural glass art installations. Particularly dramatic are his 3-dimensional art glass Chandeliers, which gained international acclaim in 1996, when his two-year architectural glass art project “Chihuly Over Venice” culminated with the hanging of fourteen Chihuly Chandeliers, one glass chandelier each at various sites in Venice. Fortunately for those of us not able to be in Venice to see Chihuly’s Chandeliers in person (they were only up for part of a year), PBS created a very interesting video which not only covers the installation process in Venice but also the blowing of the chandelier parts in Finland, Ireland, Mexico and Venice. Countless people have enjoyed this Dale Chihuly video which to this day still airs from time to time on PBS.

The next major international venue for Chihuly glass art installations was in Jerusalem. “Chihuly in the Light of Jerusalem 2000” was a major outdoor exhibition of large scale Chihuly installations in the courtyard of the Tower of David complex in the old city. My wife and I were among the lucky people who were able to travel to Israel to be present at the grand opening celebration of that exhibition which was up in its entirety for over a year and parts of which are still on site. More than one million people viewed this Chihuly exhibition at the Tower of David. The next major international exhibition of Chihuly glass was at the Victoria and Albert Museum in London in 2001. A beautiful Chihuly Chandelier still graces this major museum.

In more recent years Chihuly installations have been featured in large indoor/outdoor exhibitions at botanical gardens in major cities such as Chicago, Columbus, Atlanta, Miami and Phoenix. These shows are extremely interesting and unique as Chihuly’s organic glass installations are often so close in appearance to actual living plant forms that the boundary between art and life begins to blur and one is taken into somewhat of an altered state. Millions of people have been able to visit and enjoy these Chihuly botanical exhibitions.